The department of Cultural Heritage of CETI was established as a research center with primary goals the preservation, protection and diffusion of cultural heritage through the application of modern technologies. Based on its scientific personnel and the computing and multimedia equipment and facilities of the CETI, the Cultural Heritage Unit directs its scholarly research in the field of Humanities according to the modern needs and demands.
The monuments of art and literature dated from the Antiquity until the 20th century, is the major subject of interest. The application of the modern technologies to them is the focus of the Unit, with a particular emphasis in the development of multimedia databases, 3D reconstructions of objects and sites and GIS applications. 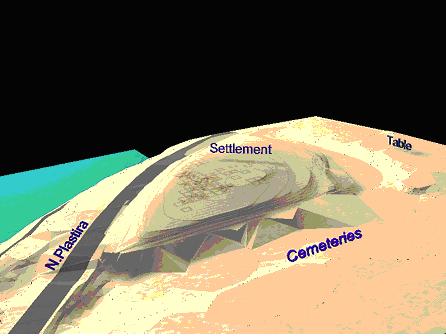 Another field of interest is the development of new methods regarding the presentation of museums and collections in ways that will attract, educate, and be conceived easily and fast by the general public, whereas they will satisfy the scholarly demands.

The project "Traditional Wood Craftsmen and Trade in the Aegean, Thrace and Cyprus" is a characteristic example of an online cultural database that will provide a considerable amount of information regarding traditional objects and professions coming from the three mentioned geographical regions. The database will be accessible to everybody through the Internet. Similar is the role of the project "Study and Web-publishing of the dry stone wall structures of Thrace, The Aegean and Cyprus".

A combination of the earlier mentioned applications (databases, 3D, GIS, Internet) is used in the project "Karabournaki-Recording the Past". This is a project regarding the digitization and the presentation through the Internet, of the University excavations taken place in Karabournaki (Thessaloniki area) under the direction of prof. M. Tiverios and his associates Dr. E. Manakidou and Dr. D. Tsiafakis.

Every object has three different types of records:

b) the conservation record, and

c) the archaeometrical record. Photographs and drawings are included in each record.

Here is also used the 3D reconstruction of fragmentary preserved objects. Photographs, architectural drawings and texts are used for the documentation and the presentation of the excavation trenches. Of great importance here is the application of GIS, because it enables the reconstruction of the site and the exploration of its geographical position in relation to the sites in the surrounding area.

A 3D reconstruction of the stratigraphy is applied in every trench. The same project includes also the digitization of the excavation notebooks, with search abilities. The last part of the project "Karabournaki-Recording the Past" regards the Bibliography. This part includes not only the publications for Karabournaki itself but also the basic bibliography on all the major categories of findings revealed in the site.

This project as well as the rest of goals of the Cultural Heritage Unit are built and succeeded in close collaboration with the Multimedia Laboratory of CETI and the Archaeometry Laboratory. There is also close collaboration with the Educational Technology Department and the e-Learning Laboratory in order to be developed the Educational goals of the Cultural Heritage Unit. More specifically the latter is interested in the development of educational projects and seminars regarding the diffusion of the cultural heritage.

Among the educational goals of the Unit is the collaboration with undergraduate and graduate students through internships and projects.